You Talk To Her How?

Some women can be really nasty when speaking to another woman. Why is this? I have witnessed the way some women communicate with other women and I wonder if they are that aggressive when expressing their differing views to men. Some may have one non-discriminating style of speech, but not all. Really, what’s the deal? Why is respect tossed out the window when views differ between some women? 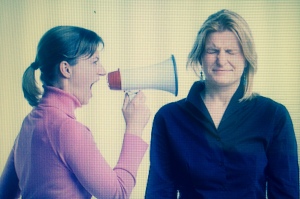 Last night, I watched a documentary on the history of women in politics. It was really interesting…It had to be for me to stay awake. (I’m still adjusting to the time change.) I read about many of these women, but it seemed different seeing actual footage of their struggles from being a viable candidate to working in a congressional club historically reserved for men only. I watched how they were unfairly and rudely treated by men in meetings and how as a result the women partnered across political party lines to form a network amongst themselves. They made time to get to know each other, allowing themselves to see pass the political imaging painted for their Washington arrival. Their bonds were so obvious that their male peers began to ask them what they were talking about, as if they had no business talking to each other…well, really talking with each other.

The documentary left me pondering…do we have to be positioned in situations which make us conscious that we are in the minority and overtly mistreated because we are women to commit—I mean really commit—to collectively uplift each other and our societal placement as women, and in turn vow to interact with each other at all times in respectful ways. Must things be that bad for us to be our sister’s keeper?